Welcome To Katie Plunkard Glass!  Here you can find up-to-date information on my current and recent projects!

Though I label this an “artist’s statement,” I like to think of myself more as a craftsperson than as an artist, even while recognizing that these two aspects of my being are inextricably intertwined.  What drives me and the work that I make, at this point in my life, is a desire to acquire and hone the skills necessary to truly communicate and negotiate with the medium that is glass.  At heart, I value creativity over technical ability, but the mastery of skills is essential if I am to be able to articulate a vision clearly without the distraction of technical limitations.  It is only when my skills meet my imagination that I can be able to share the world as I see it, without limitations.

Much of what I make stems from taking a series of techniques or objects that I wish to explore and combining them in ways so that the overall piece transcends the individual objects and techniques involved. In this way, it is actually the process and not that product that gives me the most consistent pleasure in working with glass.  Glass can be stubborn, unforgiving, and truly frustrating.  Because of that, it is impossible to entirely impose your own will on the medium.  Instead, the glassmaker must be in a constant dialog with the glass, negotiating with it and coaxing it, not forcing it, into submission.  This is something that I absolutely respect about glass and, ultimately, it becomes extremely satisfying when a piece becomes a success.

In my life, in my work and in my art I often seek to use humor to create a relaxed environment so that individuals may work effectively and/or open themselves up to critical and honest thought.  Often the work that I make is humorous on a superficial level but contains a lot more to be explored.  I try to create work that is generous to the audience in that it provides many different levels and avenues for interpretation, some of which I have not even uncovered myself.  Whether those who contemplate my work see only the humor or interpret a deeper, more provocative, commentary matters not to me.  What matters is that I have given someone the pleasure of engaging on any level.

I seek to invoke the same delight within the process as I try to create projects that are both enjoyable to make as well as to contemplate after they are made.  Working with glass can be mentally and physically tiring but, because it typically requires teamwork, for every project I undertake, that toll does not lay solely on my shoulders.  In that regard, I consider it very important to make each experience as wonderful for everyone involved, no matter how the piece turns out.  So if the creation of a piece is exciting and entertaining to the point that others want to be a part of its creation, then I have succeeded.

I began my career path in glass back in 2006 just before I began my studies at the University of Illinois, Urbana-Champaign. In the midst of earning both a Bachelor of Arts in Music and a Bachelor of Science in Media Studies, I became interested in glass and decided to apply to the Pilchuck School of Glass outside of Seattle, WA to spend my summer (2008) exploring that interest and finding out where it might lead.

That summer, it became apparent that I needed to continue this pursuit.  Though the University of Illinois had already phased out its Glass program, I was fortunate enough to make some important connections at Pilchuck and discover that I could continue my studies while simultaneously participating in the Glass program at Illinois State University, which was about an hour away from my own home at the University of Illinois.  Thus began a patchwork of experiences that has since led to me taking 5 semesters of college courses, over a dozen intensive summer classes across Corning, Pilchuck and Penland, and working with/for countless glassblowers across over 15 different studios (and counting).

In this way, I believe that I created a patchwork of experience that is stronger than any one program because of the differing perspectives, experiences and instructions that it has allowed.  I have not only learned a more diverse set of skills, each one from an instructor whose expertise it is, but also, alongside others whose expertise it is not, and could offer contrasting logics and highlight common pitfalls.  I have also been given opportunities to collaborate with other students (some of whom are instructors or established artists in their own right) from different programs around the world and different media throughout the art realm.

In January of 2011, I moved to Australia to work and train at the JamFactory.  For two years, I spent every day working with the material in some way.  Through the design and realization of JamFactory products, studio commissions and my own production and exhibition practices, my skills improved dramatically in such a short time.  Afterwards, I took a position as a studio technician at the Pittsburgh Glass Center which allowed me to continue growing those skills while learning a bit more about the equipment involved.  In 2015, I moved to Texas, first working in Austin at East Side Glass Studio with Shara Funari and later moving up to Dallas to work for Carlyn Ray at Dallas Glass Art.  Also that year, I took to the high seas to blow glass for the Corning Museum of Glass atop Celebrity Cruises’ Ships–adding to an already extensive adventure in my glass exploration.

Finally, in 2017, with enough traveling out of my system, I settled back in Austin, Texas to set up my own shop and get back to making my own work.  With all of these tools and ideas at my disposal, I am still in a constant quest to hone my skills, find inspiration and realize my own, unique voice.  I believe my experiences have prepared me to create a wonderful space for others to come and go and grow as I have but I plan to continue piecing together this patchwork of experiences, to never truly “settle” and I hope to never reach the end of this adventure.

Here is a sampling of my current and past works.  Please check out the pages for Production, Exhibition and Installation works for more detailed images. 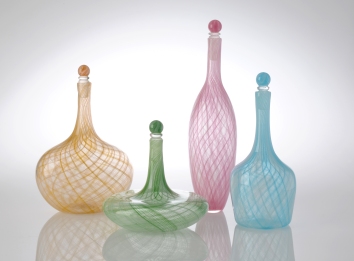